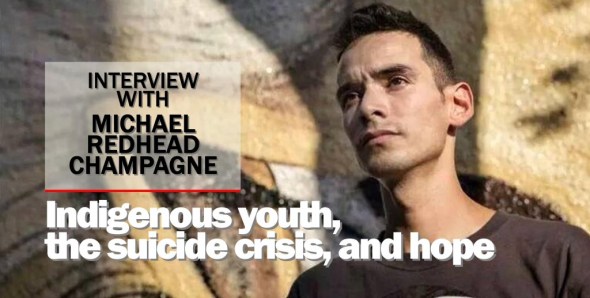 Michael Redhead Champagne has spent the last 19 years speaking out and leading by example. Recently recognized in 2015 in TIME Magazine as a Next Generation Leader for his hopeful approach to community organizing, MC is “committed to meeting groups where they are at, and taking a solution oriented approach to youth engagement, facilitation and community mobilization.” 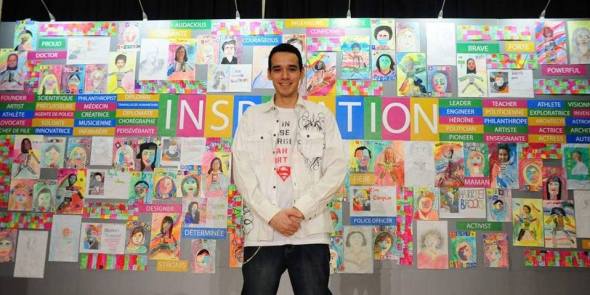 Champagne knows how to work with politicians, but he’s strongest as a talker and an organizer, able to rally hundreds of people with an impromptu speech. He represents new possibilities for a community that has been portrayed by some white Canadians as noble savages at best and drunken wastrels at worst. “He’s reframed the way we look at things,” says Ko’ona Cochrane, an indigenous organizer in Winnipeg. “He speaks the code of our youth and our traditional ways.” — TIME Magazine (Sept. 24, 2015) 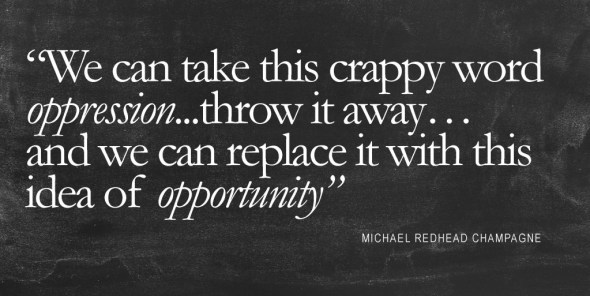 Michael has received recognition as a Manitoba Hero, a Future Leader of Manitoba & a Manitoba Aboriginal Youth Achievement Award for community service. As the founder of AYO! (Aboriginal Youth Opportunities), he is committed to various community initiatives including Meet Me at the Bell Tower, AYO Politix, ARROWS Youth Engagement Strategy, 13 Fires, Fearless R2W and Winnipeg Water Wednesday.

Michael has served as president of North End Community Renewal Corporation and is currently a board member for the Circle of Life Thunderbird House. He is also a member of United Way of Winnipeg’s Council for Indigenous Relations and is an advisor to the Garden of Compassion initiative.

“What’s the opposite of suicide?” Champagne asks. “Hope. That’s why I need to be positive always. There are literally lives on the line.”– Michael Champagne, in TIME Magazine

He maintains a busy speaking schedule and has presented in diverse settings such as health authorities, conferences, at a TEDxManitoba event and at a range of local neighbourhood events. 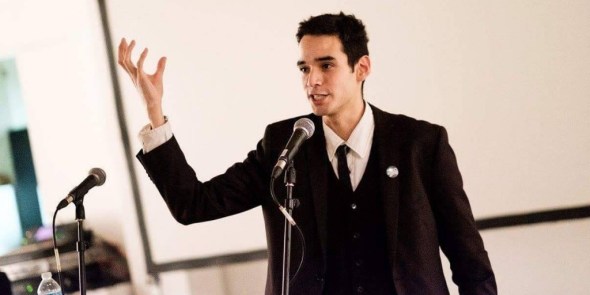 Michael Champagne’s work became internationally known in September 2015 when TIME Magazine included him among a group of Next Generation Leaders. The magazine described him as “working to bring hope to Canadian Indigenous people.”

Inspiration couldn’t come soon enough for the aboriginal community in Winnipeg, the biggest in Canada. The Canadian prairie city has one of the highest crime rates in the country, and aboriginals are disproportionately victims. But while the problems his community faces are severe, Champagne prefers to talk about solutions. — TIME Magazine (Sept. 24, 2015)

The TIME article, by Justin Worland, concluded with a focus on what has become a major challenge — both to Indigenous communities and to Canada as a nation — the tragedy of child and youth suicides among Indigenous people:

Champagne’s positivity comes in stark contrast to the existential challenges that face Winnipeg’s indigenous communities. It’s not just crime and ­poverty—aboriginal people in Canada face a suicide rate more than three times as large as that of the general population. — TIME Magazine

Michael’s quote in response to that challenge: “What’s the opposite of suicide? Hope. That’s why I need to be positive always. There are literally lives on the line.”

We speak with Michael Redhead Champagne.

682_indigenous youth suicide and hope_michael champagne_april_21_2016_40
Left-click to listen; right-click to save. 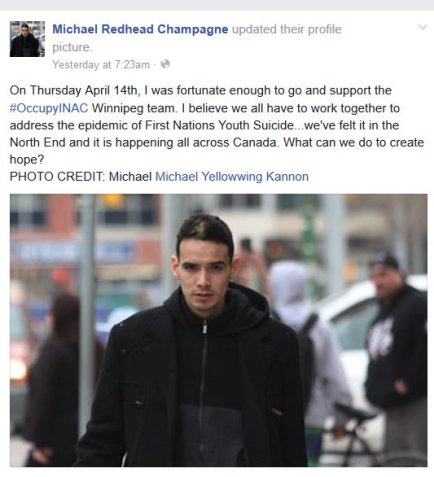 Images of Michael Redhead Champagne are from his Facebook page.