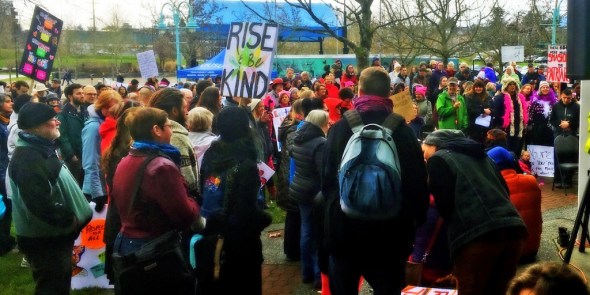 The second annual Nanaimo Women March On demonstration was held Saturday January 20, 2018, with an emphasis on intersectionality and the prevention of violence against women

A major goal of Nanaimo Women March On 2018 was to encourage local community build­ing and to motivate people to take everyday actions to learn about, raise awareness of, and to prevent gender-based violence. Organizers saw the march as an extension of the work they, and march participants, did both before and after that day. The hope is that this now-annual women’s march is a recognition of movement building.

Nanaimo Women March On would like to acknowledge that Nanaimo is the traditional territory of the Snuneymuxw First Nation. We keep this acknowledgment and respect for the Coast Salish people at the forefront of our march and thank the Snuneymuxw nation for allowing us to gather.

Intersectionality a major theme of the march 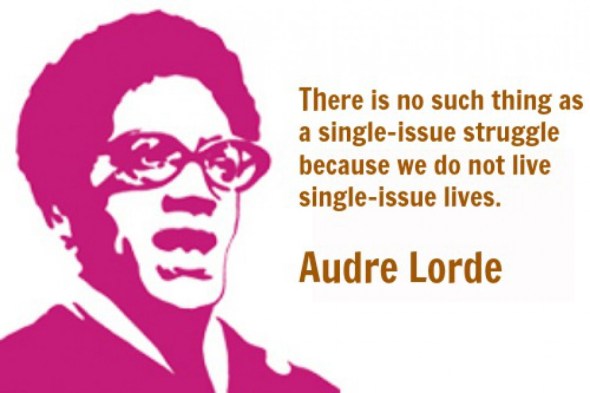 Nanaimo Women March On 2018 encouraged grassroots, collaborative, inclusive, transparent, and non­-competitive modes of organizing. The March collective adopted rotating leadership so that many voices could be heard. Additionally, the Nanaimo-based March organizers supported March On, the Women’s March, and “anyone organizing to realize a peaceful, intersectional march in service of gender justice, anti-racism, decolonization, LGBTQ2+, and diversity in age and ability.”

Intersectionality is a sociological theory describing multiple threats of discrimination when an individual’s identities overlap with a number of minority classes — such as race, gender, age, ethnicity, health and other characteristics.

For example, a woman of color may face sexism in the workplace, which is compounded by pervasive racism. Similarly, trans women of color face exceptionally high levels of discrimination and threats of violence. Looking through the lens of intersectionality, it’s not hard to see why: these women potentially face anti-trans prejudice, sexism, misogyny, racism and — due to the ignorance surrounding trans identity — homophobia.  — What Is Intersectionality, and Why Is It Important? from care2.com

No one should own a women’s march. The power is with the people. 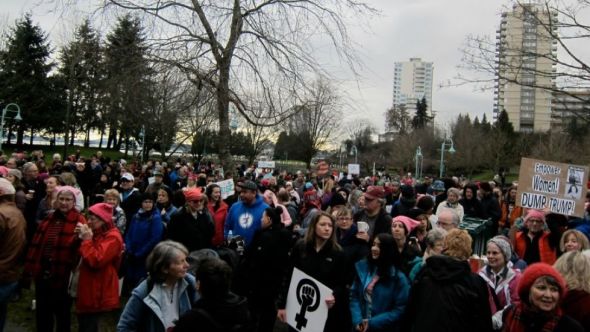 People First Radio was at the march to record the speakers.

Watch video from the 2018 March