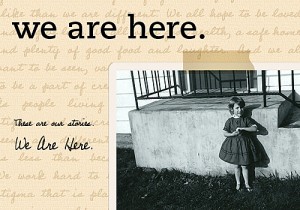 VICTORIA, BC—While this year’s UNAIDS World AIDS Day theme, ‘Getting to Zero’, aims to achieve zero new HIV infections and zero AIDS deaths, it is the goal of getting to zero stigma that is often hardest to attain. Advancements in treatment and broader access to testing have made the first two ‘zero’ goals within reach on Vancouver Island. However, for a coalition of storytellers who are living with HIV in the capital region, stigma remains a harmful and dominant force.

“Stigma is widely recognized as the main issue facing people living with HIV today. Since the beginning of the epidemic, storytelling was and remains a way for PHA’s (people with HIV/AIDS) to find their voice. Opening their hearts to the community, welcoming dialogue, and understanding takes courage. We are blessed with compassionate leaders who speak out!” says Claude Gamache, Chair of the Vancouver Island Persons Living with HIV/AIDS Society (VPWAS).

“In the past year two years, I have been verbally and physically assaulted because of my HIV status right here in Victoria” says Dawn Clouthier one of several people who set to present their stories to the public on Monday, December 2, 2013 at the Belfry Theatre for “We Are Here: An Evening of Storytelling” starting at 6:30pm.

“On December 2nd we are offering an evening to experience PHA’s telling their unique stories through theatre, music, video, dialogue, acknowledging that storytelling through its varied modalities can offer understanding and an opportunity for healing” continues Gamache.

In addition to the event at the Belfry Theatre, there will be storyboards reflecting local stories on display at the Central Branch of the Greater Victoria Public Library beginning November 18. The boards will also be on display Bruce Hutchison Branch, Juan de Fuca, and Nellie McClung Branch. This is the second year of the “We Are Here” project which will also be posted online.

AIDS Vancouver Island will offer a range of education and awareness activities across Vancouver Island on or around December 1, 2013, which is designated “World AIDS Day.” AVI’s Nanaimo offices will mark their 10th anniversary on Thursday, November 28th, between 6 and 8 p.m. at The Vault, 499 Wallace Street, Nanaimo.

The Vancouver Sun is marking 30 years of HIV/AIDS in Vancouver with a special series of articles, “Heroes, heartbreak, and hope: How AIDS made us better.” Thirty years have passed since the spring of 1983 when Mark Minogue’s death from AIDS made the front page of The Vancouver Sun.  The mysterious deaths of young gay men set off a wave of fear and loathing in Metro Vancouver that took dedicated medical professionals and years of public education to curb.

From an international perspective, UNAIDS says that accelerated progress has been reported in most parts of the world. However, there are worrying signs that some regions and countries are not on track to meet global targets and commitments on HIV. In many cases stalled progress is due to inadequate access to essential HIV services.

Image: We are here—An evening of storytelling (AIDS Vancouver Island)