Report card finds that B.C. fails to make the grade in women’s equality

While the situation for women in BC has seen minor improvements this year, unfortunately for many women, BC continues to fail to deliver on its responsibilities, West Coast LEAF says 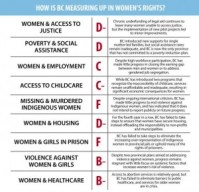 On November 2, 2015, West Coast LEAF released its seventh annual report card on women’s rights in BC. While the situation for women in BC has seen minor improvements this year, unfortunately for many women, BC continues to fail to deliver on its responsibilities.

In particular, BC has not taken action to address the ongoing violence against Indigenous women and girls, the basic human rights of many incarcerated women and girls are overlooked, many women do not have access to secure housing, women continue to be more economically insecure than men, and women remain unable to enforce their legal rights because of inadequate—and grossly underfunded—legal aid. 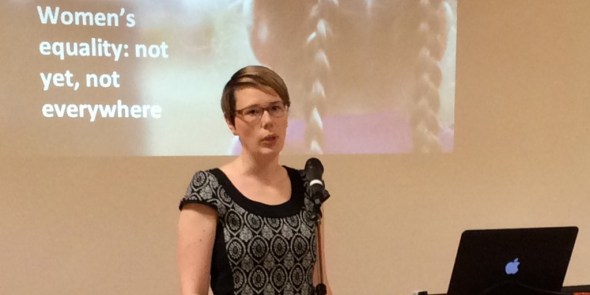 Kendra Milne is director of law reform at West Coast LEAF (Women’s Legal Education and Action Fund).
West Coast LEAF is the only organization in BC that uses the law to further women’s equality. [image by Shel Reisler]

West Coast LEAF’s CEDAW Report Card is an annual assessment of how well BC is complying with the obligations set out in the UN Convention on the Elimination of All Forms of Discrimination against Women (CEDAW), which was ratified by Canada in 1981. The report card grades BC’s progress in nine key areas in women’s rights, including access to justice, economic security, affordable housing and childcare, and safety, the foundations of a society in which everyone can participate equally regardless of their gender.

“This is our seventh annual report card and, unfortunately, we continue to see a lack of action in most areas instead of significant progress. International law requires that states take action in these areas because they are fundamental to ensuring that women can live safe and secure lives free from discrimination.” — Kendra Milne, Director of Law Reform at West Coast LEAF

The safety of Indigenous women

Of particular note, this year’s report card identifies BC’s glaring lack of action to improve the safety of Indigenous women and girls, noting the province’s failure to fully implement the vast majority of the recommendations from the Missing Women’s Commission of Inquiry, the recent intentional deletions of emails related to violence against Indigenous women along the Highway of Tears, and the ongoing international criticism of BC and Canada’s inaction.

“Despite multiple reports from provincial and international bodies that made clear recommendations aimed at improving the safety of Indigenous women and girls, BC has failed to make meaningful progress towards reducing discrimination and violence against this population. The UN Committee on the Elimination of Discrimination against Women has repeatedly expressed concern over the lack of progress in this area, but unfortunately, this year, we were forced to give an F for BC’s abject failure to respond. In fact, this year, instead of hoped for improvements, we saw regressions due to BC’s detrimental actions.” — Kendra Milne, Director of Law Reform at West Coast LEAF

Highlights from the 2015 Report Card

We speak with Kendra Milne, director of law reform at West Coast LEAF.