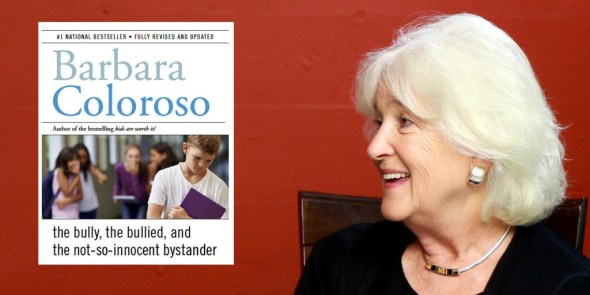 The definitive guide to bullying prevention and intervention, by best-selling author Barbara Coloroso, provides real solutions for a problem that affects young people all over the world

Coloroso was in Nanaimo on Tuesday April 14, 2015 to speak and introduce an updated and expanded new edition of her book, The Bully, the Bullied and the not so innocent Bystander: From Preschool to High School and Beyond: Breaking the Cycle of Violence and Creating Safe and More Deeply Caring Communities. It has become the definitive guide to bullying prevention and intervention since it was first published over a decade ago.

The NanGo Grannies, a group dedicated to supporting the work of Stephen Lewis, sponsored Barbara Coloroso’s Nanaimo visit. The socially aware and engaged “grannies” are working to raise awareness of the pervasive issue of bullying, while raising funds to support the needs of grandmothers in sub-Saharan Africa who care for orphans of the HIV pandemic.

We sat down with Barbara shortly before her appearance at Nanaimo’s Port Theatre to speak about her work and revised best-selling book on bullying.

We speak with Barbara Coloroso.

audio | The bully, the bullied and the not so innocent bystander: @BarbaraColoroso in #Nanaimo http://t.co/WMIvXSHQxs pic.twitter.com/idDltpmnHx