Psychiatry, the DSM, and human rights

May 23rd, 2013 | Posted by pfmarchive in uncategorized 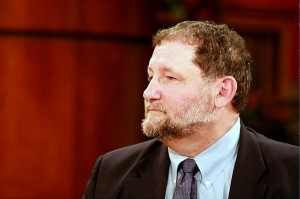 The 2013 annual meeting of the American Psychiatric Association (APA) was held in San Francisco from May 17 to 22. While delegates gathered inside the Moscone Center for what the APA called “the psychiatry event of the year” a small group of protesters gathered outside. SF Weekly reports that the group coalesced under the banner “Occupy Psychiatry”—or “Occupy the APA”. This year’s APA annual meeting has attracted significant attention due to the release, at the meeting, of the 5th edition of the APA’s Diagnostic and Statistical Manual of Mental Disorders (called the DSM for short, and sometimes referred to as the “bible” of psychiatry).

The American Psychiatric Association, founded in 1844, is the world’s largest psychiatric organization. It represents more than 33,000 psychiatric physicians from the United States and around the world. The organization has been challenged by controversy related to the contents of its new DSM—and by individual people who say they either were, or still are, being mistreated in the name of psychiatry.

Concerns about the DSM-5

Concerns about the revised DSM, the first revision in nearly 20 years, have come from multiple groups, including psychiatrists themselves. The former head of the department of psychiatry at the University of British Columbia, John Livesley, says he quit the DSM-5’s personality disorders work group over the “disregard for evidence.” Associated Press reporter Lindsey Tanner provided an overview of the most contentious changes to the DSM in an article called “Shrinks, critics face off over psychiatric manual“:

— Calling frequent, extreme temper tantrums “disruptive mood dysregulation disorder,” a new diagnosis. The psychiatric association says the label is meant to apply to youngsters who in the past might have been misdiagnosed as having bipolar disorder. Critics say it turns normal tantrums into mental illness.

— Diagnosing mental decline that goes a bit beyond normal aging as “mild neurocognitive disorder.” Affected people may find it takes more effort to pay bills or manage their medications. Critics of the term say it will stigmatize “senior moments.”

— Calling excessive thoughts or feelings about pain or other discomfort “somatic symptom disorder,” something that could affect the healthy as well as cancer patients. Critics say the term turns normal reactions to a disease into mental illness.

— Adding binge eating as a new category for overeating that occurs at least once a week for at least three months. It could apply to people who sometimes gulp down a pint of ice cream when they’re alone and then feel guilty about it.

— Removing Asperger’s syndrome as a separate diagnosis and putting it under the umbrella term “autism spectrum disorder.”

Prominent critics, according to the Associated Press, say the APA is “out of control, turning common human problems into mental illnesses in a trend they say will just make the ‘pop-a-pill’ culture worse.” 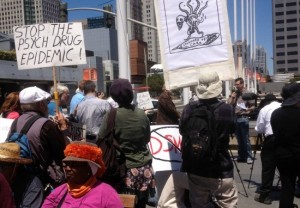 Anti-psychiatry activists, many of whom consider themselves to be ‘psychiatric survivors’, have concerns that go far beyond the DSM and its various iterations. They’ve experienced and/or observed the activities and treatments associated with psychiatry over decades; many say their human rights have been abused by the processes of psychiatry.

Among the protesters in San Francisco over the weekend of the APA annual meeting, five individuals stand out for their personal stories and ongoing activism against what they call “serious human rights abuses”:

Leonard Roy Frank, psychiatric survivor and editor. “As psychiatrist Thomas Szasz wrote in 2008, ‘Modern psychiatry — with its Diagnostic and Statistical Manuals of nonexisting diseases and their coercive cures — is a monument to quackery on a scale undreamed of in the annals of medicine.’ Now is the time for the people to hold the American Psychiatric Association and its members accountable for their crimes against humanity.”

Ted Chabasinski, psychiatric survivor and lawyer, who was electroshocked for experimental purposes when he was six years old. “The increased labeling and drugging of children, and the way the new DSM puts everyone at risk for being called ‘mentally ill’ must be stopped. Everyone must realize that they too can be called crazy, not just those who have already been dragged into and trapped by the system.”

Chaya Grossberg, psychiatric survivor and healer. “Rather than being a source for healing, the American Psychiatric Association has damaged the souls and bodies of millions of Americans.”

Michael Cornwall, PhD, licensed therapist and human rights activist. “The profession of psychiatry lives in a collective state of denial. Psychiatrists are true believers with a religious fundamentalist type of fervor that allows them to routinely injure, and frequently hasten the death of those they are sworn to heal. But the reckoning is upon them. Their blatant human rights violations will not stand the light of day.”

James B. (Jim) Gottstein, psychiatric survivor and lawyer. “Hundreds of thousands of people are locked up and drugged or electroshocked against their will every day under the auspices of the American Psychiatric Association. These are human rights abuses on a massive scale in violation of United States and International Law. The American Psychiatric Association must be held accountable for its role in these horrors.”

Jim Gottstein, who heads the Law Project for Psychiatric Rights, delivered a hard-hitting speech in San Francisco contending that the APA is a “fraudulent enterprise” and a “shill for big pharma”:

At its meeting this week, the American Psychiatric Association is releasing the 5th Edition of the Diagnostic and Statistical Manual of Mental Disorders, known as DSM-5. It is really just the Book of Insults. A couple of weeks ago the National Institute of Mental Health abandoned using the DSM because it lacks validity. It lacks validity. That is what we have been saying for decades. But our observations were rejected because we have been labeled mentally ill with the Book of Insults. The DSM has officially been declared invalid.

This will not stop the American Psychiatric Association, in the pursuit of riches, from using it to push its largely ineffective and harmful drugs.

Jim Gottstein is the attorney who forced pharma giant Eli Lilly to pay more than $1 billion in settlements over the anti-psychotic drug Zyprexa.

We speak with Jim Gottstein.

Therapist Michael Cornwall at Occupy APA in San Francisco (May 19, 2013)