“We need more men to stand with women and speak up about this issue”: JR LaRose 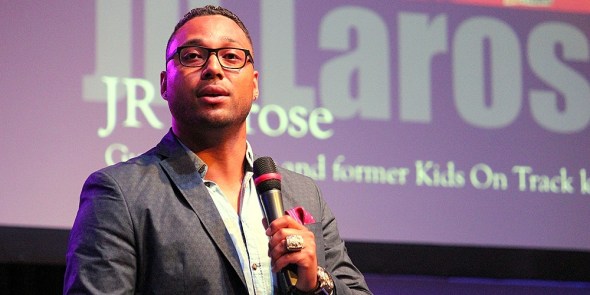 JR LaRose is a 2011 Grey Cup champion. A proud member of One Arrow First Nation, he is an ambassador for Aboriginal peoples. He is an accomplished speaker who has facilitated over 400 presentations throughout Canada and the United States since 2008. A proud family man, JR’s path to success has been a long and hard fought journey. Growing up in low incoming housing in Edmonton’s inner city didn’t exactly set JR up for success but it did give him the drive to succeed. JR grew up without a father. His father, of Nigerian heritage, was deported back to his native country before JR was born. JR never met his Dad. [Source: jrlarose.com] [On Twitter: @j_tonto27]

Be More Than a Bystander is a groundbreaking partnership between the BC Lions and EVA BC that sees sports icons from the BC Lions using their status and public profile to create awareness and urge everyone to “Break the Silence on Violence Against Women”.

When Be More Than a Bystander launched in 2011, the four main components of the program were: (1) to develop a broad public awareness campaign featuring BC Lions players; (2) develop a curriculum and teaching materials for a school program and train BC Lions to deliver in-person presentations in schools throughout BC; (3) deliver training to football coaches in the province on how to talk to kids about violence against women and respectful relationships; and (4) and create a film that would appeal to youth with positive messaging that it is ‘cool’ to respect women and the importance of bystanders speaking up to prevent violence against women and girls.

JR LaRose spoke in Nanaimo at Vancouver Island University on Monday, February 1st, 2016. People First Radio was there to record his presentation and we present it in full on our People First broadcast this week.