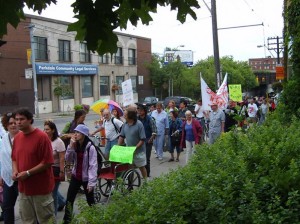 There have been multiple approaches to challenging discrimination against people with disabilities/disabled people including “Pride.” These started gaining ground in North America during the 1970s thanks to groups in the disability rights movement and other social movements. Similar to how LGBTQ communities are reclaiming the word “queer”, Mad Pride activists seek to reclaim language that has been used against us such as “mad”, “nutter”, “crazy”, “lunatic”, “maniac”, and “psycho”. Reclaiming language is political and challenges discrimination. Mad Pride participants use and refuse a variety of labels. Mad Pride participants choose “mad” as an umbrella term. [source: mad pride toronto 2013]

The first Toronto Pride event for mad people was held in the fall of 1993. It was called Psychiatric Survivor Pride Day. The name changed to Mad Pride in 2002 and events are now held in the summer to correspond with Bastille Day (during the French Revolution, citizens stormed the Bastille to liberate prisoners and mad people) and International Mad Pride Day on July 14. Mad Pride is celebrated annually around the world.

“There have always been psychiatric survivors all over the City of Toronto whether it is Regent Park, St. James Town or any place between and we are looking to recognize that,” Bach said. “There are many communities of psychiatric survivors and mad people across the city so we wanted to give them a voice and a chance to participate.” 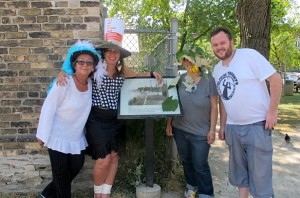 Mad Pride was initiated in 1993 by West End Survivors under the name Psychiatric Survivor Pride Day. In 2003, Parkdale-based Friendly Spike Theatre Band took a leadership role in planning the event and organizing from 2003 to 2010 was led by Ruth Ruth Stackhouse of Friendly Spike and Peggy-Gail Dehal-Ramson from Parkdale Community Legal Services. [source: InsideToronto]

Author James Fitzgerald, who wrote What Disturbs Our Blood, told Torstar News in 2012 that mad pride is also about “expanding the discussion on alternative methods to treat mental illness. But most importantly, it’s simply about acceptance.”

We speak with Toronto Mad Pride organizer Jeremiah Bach, in an interview first broadcast in July 2013.