People who use drugs demand a say in fentanyl overdose responses 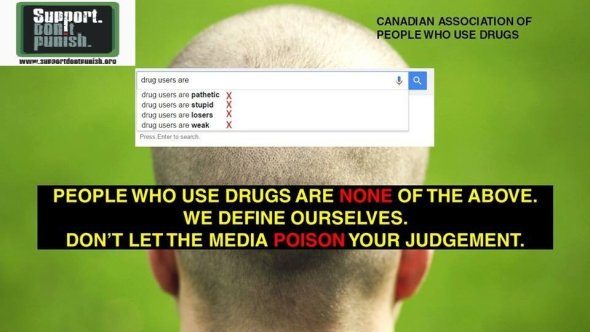 “There’s a common public misconception that we are unable to make decisions for ourselves. Truth being we are excluded from even participating in policy decisions that determine our fates”

National Day of Action on the Overdose Crisis 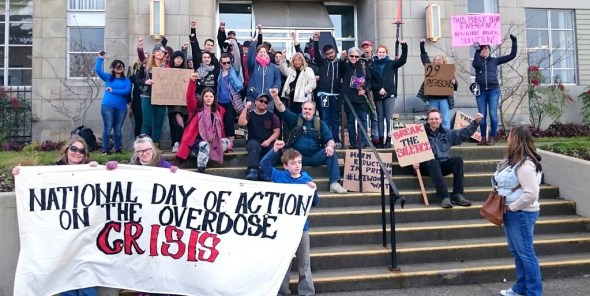 Nanaimo participants in a National Day of Action on the overdose crisis marched to the steps of city hall.
Find out more about the Nanaimo response, and listen to audio here.

Canada is in the midst of the worst overdose crisis in its history. But rather than take meaningful actions to prevent needless deaths and further harms to people who use drugs, advocates and activists say that governments have instead pushed forward with the “war on drugs” and its harmful policies.

On February 21, 2017, a first national day of action was held across Canada to demand that the various levels of government take meaningful and concrete action to address the opioid overdose epidemic devastating communities across the country. Participants in rallies and marches demanded concrete actions to put an end to the war on drugs, remove barriers to health care, and implement policies that are informed by real life experiences of people who use drugs and providers.

Demanding a seat at the table 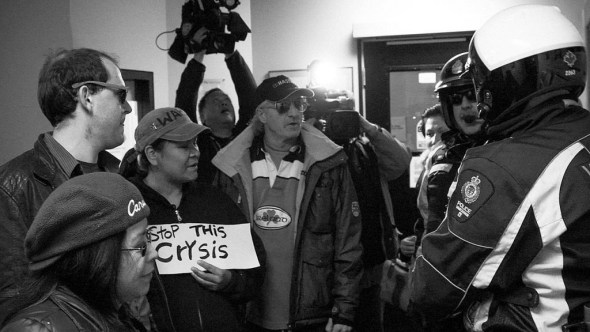 Representatives from the Canadian Association of People Who Use Drugs (CAPUD)
and others occupied a Health Canada office in Vancouver on February 21, 2017 (National Day of Action).
Image from the CAPUD Facebook page.

Participants in the National Day of Action made several demands, including access to safe consumption sites, harm reduction supplies and opiate substitution therapy. Drug users are also calling on the government to include them in making decisions that impact their lives.

“We’re disrupting a narrative about ourselves,” organizers with the Canadian Association of People Who Use Drugs wrote in a website post about the rally. “There’s a common public misconception that we are unable to make decisions for ourselves. Truth being we are excluded from even participating in policy decisions that determine our fates.”

During the day of action, activists from a range of groups representing people who use drugs (including Vancouver Area Network of Drug Users (VANDU), Canadian Association of People Who Use Drugs (CAPUD), Western Aboriginal Harm Reduction Network, and others) occupied a Health Canada office, located at the Sinclair Centre in downtown Vancouver. The CAPUD website reports the following:

This occupation was used a means to reiterate the federal demands for policy change that we delivered directly to Health Canada. An end to the war on drugs, immediate exemption for all proposed supervised consumption sites across Canada, implementation of methadone maintenance and harm reduction services in federal Canadian prisons, and removal of all barriers to heroin-assisted treatment, so the drug can be produced within Canada. Additionally, we want and need Health Canada’s support to fund user-led organizations so we can advocate for ourselves.

A snapshot of the situation suggests complexities will slow progress 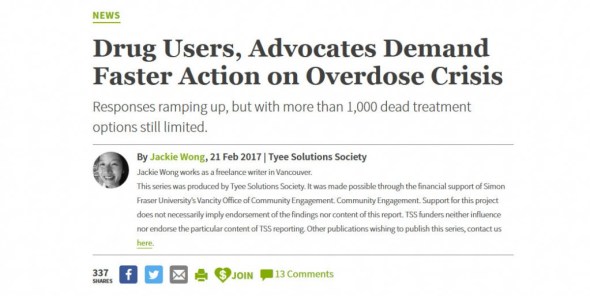 Tyee Solutions Society journalist Jackie Wong looks at a range of groups, individuals and institutions involved — in one way or another — with the ongoing fentanyl-fueled opioid overdose crisis that is deepening and spreading across the country. Her article, “Drug Users, Advocates Demand Faster Action on Overdose Crisis“, examines a number of themes including: people who use drugs demanding a larger say in policy responses; the impacts ‘on the ground’ among people who use drugs; the response, to date, of the federal government; funding promises; and lack of coordination.

We speak with Jackie Wong.